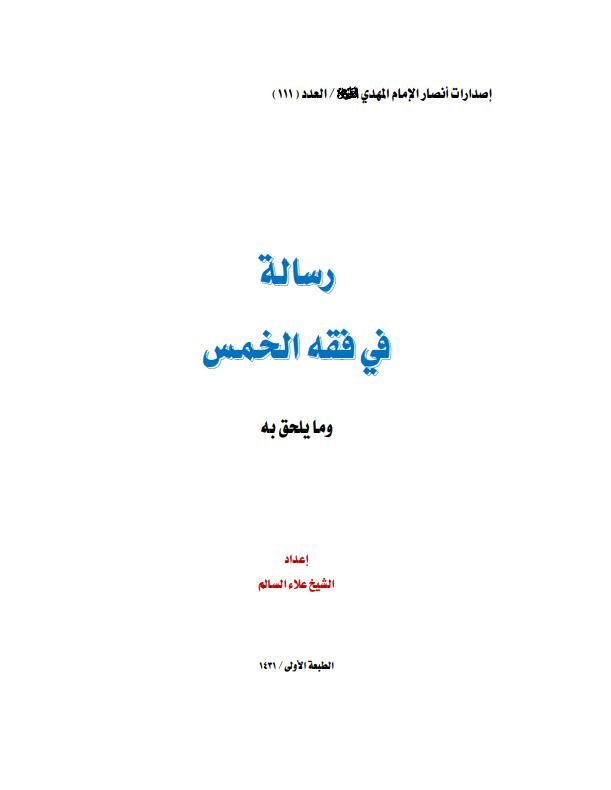 Note: there is other literature from the Syed (as) such as رسالة الخمس (Publication on Khumus) which has not yet been translated, however, once it has we will upload it into this site.

An important excerpt from that book is given below, taken from page 3 which explains the importance of Khumus and the direct link to the Imam (as)…

“Khumus is (calculated and paid) day by day may Allah support you, so the believer assesses themselves every day, and since this matter is difficult for people and since they are used to checking and examining their own accounts as individuals and annually for organisations and companies, we have said ‘(calculate and pay it) every year’. So it is necessary that the believer account for themselves in a period shorter than a year, i.e. that they account for themselves once a year but they cannot take longer than that.

Bear in mind that khumus is for the Imam, so it is for him to annul it in any era or to obligate it in another era, and it is for him to set the period for the believer to account themselves for it and the Imam sets that instead of daily, monthly, quarterly, or annual, as has now been been done…

There is wisdom within khumus, such as the following: the Imam, if Allah wills for him to rule, then he will tend to the matters of the people and their needs, specifically the poor among them. So, through khumus the Imam is able to comfort the people and repel wanting and neediness from the poor and to bring about justice amongst people (What Allah has fulfilled in His messenger from the people of the dwellings, then it is for Allah, the Messenger, the Near Ones, the Orphans, the Destitute and the Wayfarer, so that it is not circulated amongst your rich people. And what the Messenger gives to you, take it. And what he forbids you from it, abstain from it. And be wary of Allah – verily Allah harsh in punishment) (Al-Hashr:7)

Now, if you analyse the economic systems of the world’s nations, you will find they obligate tax, which approximates to the khumus calculation in many of these nations and tax bears no recompense, nor reward for the person who pays it. Hence, those who deny Allah’s vicegerent in His earth and those who believe in the governance (supremacy) of man all pay, despite not wanting to, because the nations and the governments force them to pay khumus with the label of tax. But they spend their wealth then it will be a source of grief for them because they paid it to establish governance of man on the earth (Verily those who disbelieved spend their wealth to prevent from the path of Allah, so the will spend then it will be a source of grief, then they will be overpowered and those who disbelieved will be gathered to hell) Al-Anfal:36

Whilst Allah, and from His mercy, has obligated on the believer to pay this very same money – i.e. khumus – and at the same time he affirms them whilst they pay it and purifies them through them spending it (Take from their wealth as a charity so that you can cleanse and purify them through it – and send blessings on them, for your sending of blessings is tranquillity for them and Allah is all hearing, all knowing)

And bear in mind, may Allah fortify you, that khumus is very important for the establishment of just Islamic economics, hence, Islam does not believe in Capitalism or Socialism, but it places khumus as the economics in the hand of someone about whom it is certain that he is someone who is ascetic, just and wise in spending and in this way:-

Equity between believers and between the believing states is guaranteed in Islamic Economics, so there will be no satiated Islamic state whilst another whose people are wailing from the burden of poverty and neediness. In this way, the financial matters of the people, the orphan, the destitute will be rectified and there will not remain a hungry person nor anyone without clothing, nor anyone living rough, and this reflects positively on the social state of Muslim society. So the two states of being satiated or impoverished have a negative social effect, at the very least leading to deterioration of good manners like kindness and equity and altruism and it results in the appearance of bad manners such as sexual corruption and greed etc

And there will never remain someone who is satiated for or with their satiation whilst they can see there is someone impoverished or needy, after he and society as a whole that there is someone who is Allah’s vicegerent in His earth who is spending his wealth which is a fifth (khumus) of the wealth, for the benefit of the people and to take care of those in need. In this way Allah’s vicegerent will be a role model, through his spending of the khumus money – with (the guarantee of) his ascetism and his distancing himself from the adornments of the world, despite him owning it – he will remind every satiated person and will make him realise the inadequacy and fault and feeling small, whilst he immerses himself in the adornments of the world and lives a life of luxury at a time when there is someone impoverished and needy suffering from austerity. And this is very important to solve people’s economic issues, instead of a bad role model in human society as is the case today – and as was always the case in the government of the tyrant – the privileged self-indulgent individual who just wants to accumulate wealth – in any way possible without any limits – so that his personal desire can be fulfilled, thus, society with its impoverished and its rich, unfortunately is like dogs who are fighting over a dead body, from which the strong will be satiated and the weak will drag its tail around it and will suffer from the pangs of hunger.

Allah’s vicegerent in His earth, as he is important like a religious, ethical, social role model, is also very important as an economic role model that corrects the condition of the people, so when they believe in him their condition will be economically corrected (Had the people of the villages believed, We would have opened up for them blessings from the sky and the earth, but they denied so We seized them with what they had earned) Al-A’raaf:96. So this verse does not only mean divine help from the unseen realm, but it means what I have proposed from a natural material means to fix the economic condition of the people, and he is Allah’s vicegerent in His earth and his just and wise dealings with a fifth (khumus) of the wealth for which he is the personal owner, as well as his giving it away, as the best example in ascetism and distancing himself from luxury and fulfilling the needs of the needy.

This is the fundamental central point in Islamic or Divine Economics and one of the most important means for it different from any other economic situation.

Islamic Economics are centred around Allah’s vicegerent and without him nothing else can possibly be called Islamic or Divine Economics, with the aim of bringing about justice amongst people.”

This is some of what he explained, in brief – may my soul be his ransom – and because the Imam is from the Prophet’s family, he is known – in some of what is known about him – by the lawful (halal) and unlawful (haram). Narrated by Al-Harith b. Al-Mugheerah Al-Nasriy: I asked Abu Abdullah (as): what is the Imam the Qa’im (as) known? He said (as): by tranquillity and dignity. I asked: ‘And with what (else)?’ He said: you will know him through the lawful (halal) and unlawful (haram), and by the people’s need of him and that he will not need anyone, and he has the weapon of Allah’s messenger (pbuhahf).’ I asked: ‘Will he be anything but an executor (wasiyy) son of an executor (wasiyy)?’ He said: ‘He will only be an executor (wasiyy) and son of an executor (ibn wasiyy). Ghaybat Al-Nu’mani:129.

In the light of this divine path which Aal Muhammad (pbut) have explained in explaining the Imam the Qa’im, I put before the Ansar Allah – Ansar of Imam Mahdi (as) ‘Publication on the Jurisprudence of Khumus and related matters’ which contains important answers from Syed Ahmed Al-Hasan (as) covering most khumus-related matters that people are subject to and all of this content has been taken from him – Allah’s blessings be upon him. The sources are as follows:

2 – Answers for questions that some of the believing brothers had sent to him, which he then answered. Some of these have been recorded in Al-Jawab Al-Muneer.

Since the Al-Anfaal (war booty) is also linked to the Imam through his ownership of them, I have appended that to the discussion on khumus here.

My master Ahmed Al-Hasan … fate has come between us and you, and the days have passed after waiting years and eons for you, and you have become exiled and expelled, but your mercy has taken care of us, us who are people of mistakes and short comers with regards your right, oh Aal Muhammad, other than if you would take us by the hand to Allah’s straight path and explain to us His lawful (halal) and unlawful (haram), that the circle of cleanliness for your wilayah be complete, for which Allah glorified, has taken a pledge from His creation.

Oh son of Allah’s Messenger, I place before you what I have collected from Allah’s shari’ah which you have explained with answers to the questions that came to you. You explained them despite having to face harshness from this era and its people and it was shari’ah that was to vanish like your disappearance, oh Ahl-ul-bayt, so that the non-compliant scholars fill the the lives of people with rulings do not lead to Allah’s religion and his shari’ah in any way. I ask Allah glorified and hope that he establishes you in His earth, to establish His religion and His governance (supremacy).

And praise be to Allah, Lord of the Worlds.