The reign of the 12 Mahdis

The reign of the 12 Mahdis

Frequently Asked Questions › Category: Biographical › The reign of the 12 Mahdis
0
Vote Up
Vote Down

How long will the 12 Mahdis reign for? 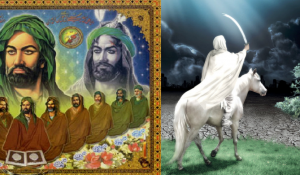 Reign of the 12 Mahdis

What is clear is that the reign of the Mahdis (pbut) is an extension to the governance of Al Imam Al Mahdi (pbuh), as discussed in Adillah Alda3wah Almahdawiyyah أدلة الدعوة المهدوية ص ٥٧

Ahmed Alhasan is the first of those 12 mahdis and their reign is known to start from the Minor Resurrection until the period of Arraj’ah (the return), since the end of their reign will be marked by a discontinuation of their lineage and the commencement of the Return / الرجعة period.

Regarding the length of their reign, it is not exactly clear, suffice to say that it is expected to be more than merely 8 or 40 years as sometimes appears in the narrations. This is because Allah swt keeps the knowledge of many matters to Himself, merely disclosing what is needed by the Hujjah of each era.

Further, the last Mahdi will have no progeny, hence, after he passes away, the narrations talk about the Return / الرجعة starting and that Imam Hussain as will be the one who comes to wash the body of the 12th Mahdi and to bury him. This is possible, since Imam Hussain as will be the first to reign in the Return period.
This topic was discussed at length in a programme on the Arabic Saviour Channel, as produced by the IHELRS where Dr Abdur Razzaq Al Dirawi and a few other teachers of the Howzah Mahdawiyyah explained that we have a greater understanding of how successorship is transmitted through the generations: it is not necessary for each mahdi to follow the previous one immediately. The evidence of that is where Allah swt has previously allowed for gaps in-between a prophet or an Imam, though He would have someone always present on the earth that was not mentioned in the will, however, they were the one that carried the will and the knowledge from the previous hujjat to the next one.